My month of living Snappily: A Snapchat case study and tips 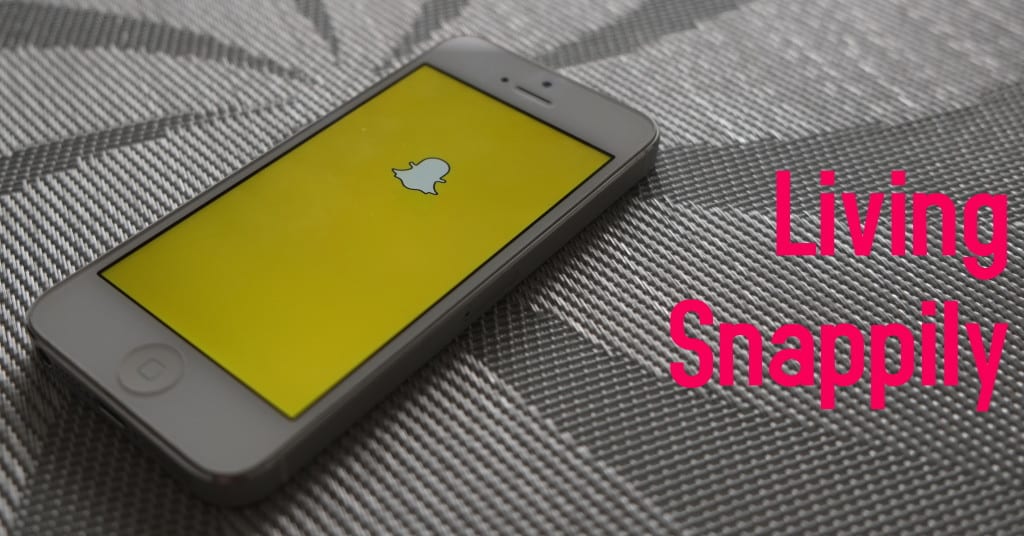 One of my New Year’s resolutions was to network more. So I joined the LEO Dublin Women’s Business Network. My first meeting as a fully paid up member was January which kicked off on a suitably go get em note with Breda Stackpool. During the course of her motivating,  January presentation Breda Stackpool mentioned that a client of hers had made numerous sales worth an impressive amount of cash via Snapchat. My ears pricked up: I had heard Paul Buckley, Head of Social Media in Aer Lingus, talking at MeasurementConf15 about Aer Lingus using Snapchat for customer engagement and a certain amount of PR traction when launching a new route but actual measurable sales? I was intrigued. I knew I finally had to reboot my snapchat account and give it another go.

Mid- January I started Snapchatting again and watching other users’ snaps. I googled Snappchatters worth following in Ireland and followed some of them although I wasn’t mightily engaged by the idea of following celebrities, (their) stylists, beauty bloggers and personal fitness types.  If you’ve met me you have seen the evidence of that lack of interest. I followed one or two social media types that I know would be early adopters and apart from Krishna De I’m not seeing a huge amount of action there. I followed my nieces. But mostly I followed my cousin Rosemary MacCabe who I can contact on numerous platforms, anytime I like anyway because she owes me for being the best big cousin ever. I also quizzed the staff in my hair salon about how they use it. Nothing if not scientific in my research, eh? 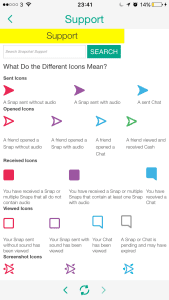 What do those Snapchat Icons mean?

This was where I hit my first snag. Previously when I joined Instagram or Periscope or Vine or whatever was flavour of the moment I used social sign-in or connected my social networks and suddenly all those folks who I find very interesting on the topics of content strategy, online marketing, social media, user experience, web design and development and so on would be there waiting for me to join in on this new platform. But Snapchat didn’t offer that frictionless meshing of networks. So the experience of following folk on the Snapchat network is rough and messy. I read their FAQ thinking I must be doing this wrong. How can this be so hard? I think that as an “older” user the reason I found this so unsatisfactory is because not many of my peers are using Snapchat. Professionally it’s a harder sell so not many of my favourite online professionals are making use of it either.

There are a few ways to add other snappers: by username, from address book, by Snapcode (that ubiquitous ghosty QR-type thingy see mine below), add nearby or by sharing on your other networks.

As a parent, I’m quite keen on these “add user” options. It means that Snappers will generally have another connection with their network on Snapchat and in most of those cases above they will be close enough to either be in their company or their address book.

I’m writing about Snapchat right now. I have mixed feelings about it. What is it good for in your opinion?https://t.co/NjXrxh6m0x

As to actually using Snapchat I found it very one sided. It felt a lot like it was just me blethering to the camera. (I am also not mad keen on the portrait aspect of the framing but that’s probably my decrepitude rearing its ugly head again.) Bear in mind that I’m a complete old fogey, who wouldn’t dream of asking my mom pals, or book club buddies or my school friends if they are on Snapchat. I might ask them but I would be extremely surprised if any of them said yes. Also the fact that the only folk I do know on it are my aforementioned nieces (who no doubt have now fled the platform due to the invasion of Aunt Roseanne), my cousin (who I can actually speak to IRL) and online marketing peers (who don’t need to know about what I am making for dinner) meant that there was very little reason for me to use Snapchat as a messaging app. I have DMs on all the other social platforms when I need to reach people, I have WhatsApp, SMS and even email. I use Slack with project co-workers and sometimes actually talk to people on the phone or meet them face to face. I’m not sure I have the personality or the online persona to make the most of Snapchat as a broadcast tool.

My cousin on the other hand most certainly does have the personality. Rosemary Mac Cabe is the former Deputy Editor of Stellar Magazine, long time fashion, beauty and lifestyle blogger who is outspoken online on mental health, women’s issues and dogs. She is also a long time client of OnlineHub. Like many others I wonder where she gets the time. However she mentioned to me once that Snapchat is a great place for her to generate and test ideas that might later become blog posts or that she can flesh out on her newly launched vlog. She reports that her Instagram following has grown from 2,000 to 30,000 in the last year which she attributes to cross promotion across Snapchat. She has also, in this time, invested energy in a Facebook page, some upgrades to her blog and increased her blogging frequency. While she has been approached to promote products by brands nothing was the right fit at the time we discussed this. She reckons that it is a huge referrer to her site but (and this is a huge “but” for business) it’s quite difficult to measure that unless unique URLs  are created for Snapchat. However between 11,000 and 11,500 folk view her Snaps everyday and we can see increases in her direct and organic search with low bounce rates at the time and shortly after her snaps. 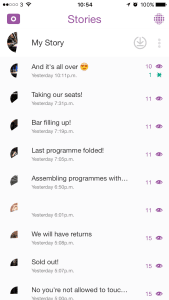 However, during my month of living Snappily, I also developed a great use case for Snapchat. I think this will appeal in particular to many of the members of the National Association of Youth Drama to whom I have presented online marketing workshops in the past. During the time that I was experimenting with Snapchat I was also working very hard on The 24 Hour Plays in aid of Dublin Youth Theatre. I am the vice chair of  the board of Dublin Youth Theatre and apart from the advice I impart on marketing and strategy I also donate a chunk of my time in the pre-production and promotion of The 24 Hour Plays: Dublin. I developed a site for them which I maintain and I assist with their Twitter and Facebook pages also. While there is a lot of activity prior to the event it is during the 24 hours that the production is happening that social media really comes into its own. I had the added bonus of having all round good guy Darragh Doyle as my 24 hour sidekick this year so I was able to Snap as well as Tweet. Again I found the process of building followers on Snapchat full of friction. This might be cultural: show me an Irish person who relished the idea of posting on Twitter or Facebook, even when posting as The 24 Hour Plays:Dublin for example, to say, “Hey can’t get enough of us on Twitter/ Facebook? Have more on Snapchat!” Bleurgh. Therefore Snapchat would not have been our busiest medium by any stretch during The 24 Hour Plays: Dublin but it certainly gained a certain amount of traction. It was apparent as well that many of the young people were engaged by it and that is a success in my book. Because of the 24 Hour lifespan of the content it was also a perfect fit for The 24 Hour Plays. It definitely helped captured a lot of the excitement and nerves. Other snappers sent good wishes to folk they knew and saw on screen. I had a bit of a celebrity moment myself as a woman stopped me in the foyer to tell me I was doing a great job.

Did Snapchat sell any tickets for The 24 Hour Plays: Dublin? I doubt it. Many Snapchatters use discount codes to track sales and this would seem to be the most effective way to measure the effectiveness of the channel. The Abbey Theatre very generously and effectively manage the ticketing for The 24 Hour Plays: Dublin so we have less control over discounting and no access to (real time) analytics to see whether the Snapchats created spikes in sales.

However I do think that theatre companies, especially the youth theatres, could use it very effectively to help build the buzz coming up to a show during rehearsals. It certainly had that effect during the 24 Hour Plays and over a three week or so rehearsal period traction could be developed far more effectively. We had very little to show on The 24 Hour Plays: Dublin Snapchat before we gathered at The Peacock in The Abbey Theatre on January 30th but a regular production or indeed any process that develops artifacts over time could owrk very well on Snapchat.

My conclusions therefore are

If you would like a real insight into how the teen target market use Snapchat I found this article by Buzzfeed’s Ben Rosen, um, enlightening.

Snapchat image above and on homepage by Adam Przezdzlek from Flickr. The loveliest one I could find or make :)

This site uses Akismet to reduce spam. Learn how your comment data is processed.

Spread the word.
Everyone needs an OnlineHub.